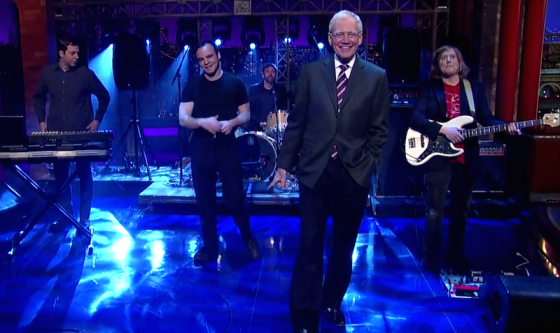 In this little item over at Pitchforkia, author Lindsay Zoladz notes that David Letterman had a performer from a Pitchfork-accredited act on his show and apparently thought the lead guy’s dance moves were fun and/or funny:

In fact, he was so impressed that he is now trying to make Herring’s dance moves A Thing. During last night’s episode… Letterman repeatedly exclaimed “Let’s dance!” and cut to a clip of the performance (sometimes in a three-part split screen).

What I think is fun and/or funny is the snide tone that’s used in this piece—starting with the title: “David Letterman Trying to Turn Future Islands Dance Moves Into a Meme,” and Zoladz’ repetition of the “trying” angle in the piece itself, painting Letterman as some faintly desperate hack; “Hey, get a load of granddad trying to be all up in our scene—what a maroon! He’s trying to make a thing out of the thing we already made a thing out of. Late to the party much, Dr. Squaresville?”

The fact that David Letterman was making things “A Thing” before Pitchfork’s dismissive slackers were an idle twinkle in the milkmeme’s eye has apparently been overlooked in favor of the giddy thrill Zoladz seems to relish as she implicitly indicts Letterman for his lame attempt to latch onto her cool kids’ crowd, with their memes and Things.

Or something? To be frank, it’s not quite clear where Zoladz or her piece really lands, beyond a vaguely condescending message of “Nice try, TV guy.”

David Letterman may not be primarily responsible for the introduction of the “meme” into American popular culture, but he is responsible for some of the more deeply-implanted memes of the last thirty years. His Stupid Pet Tricks and Stupid Human Tricks bits were stupidly brilliant ideas that others turned into full-on TV shows like America’s Funniest Home Videos, Jackass and more. And his pre-post-ironic standing-outside-his-own-joke-and-smirking delivery has become ingrained in popular culture to the point where it’s simply status quo. Taking potshots at your network bosses? Another Letterman trope that’s become entrenched in the contemporary zeitgeist of jaded, post-ironic ironic sincerity; you might have caught some of it when 30 Rock was trying to make that a thing.

The title and tone of Zoladz’ Pitchfork piece indicates that she’s never seen the David Letterman show before. Which is certainly fair; I would imagine that Pitchfork staff writers have far more awesome and world-beating things to do during his time slot, in hep spots where squares aren’t invited and doing your homework is for later, man. But ignorance of the Letterman is no excuse; just because you don’t know anything about him doesn’t mean you get to decide he’s a phony, trying to ride the coattails of a trendingly buzzy indie-pop band.

Or—and, honestly, this didn’t occur to me until all the way at the end here—does this snide Pitchforkian tone arise from the awkwardness inherent in realizing that the same wacky dance moves that a cool, in-the-know and on-the-ball Pitchfork writer thinks are cute and funny are somehow also enjoyed for their funny cuteness by—OMFG—an old late night talk show guy? Who, like, my parents watch? NOT COOL, MAN! That totally undermines my appreciation of it! Now, when I watch Future Islands guy, I keep thinking about old late night guy and it’s just ruined!

David Letterman doesn’t need me to defend him, nor will this blog post do much for the world beyond making it evident that I’m impatient with smug bullshit. But if Pitchfork (and, you know, the internet) isn’t going to operate with a quality filter, why should I?